Last month, in the days approaching Thanksgiving, the parents of Ashawnty Davis had little to be thankful for. Instead, an absolute tragedy engulfed their lives and their family would never be the same; not ever again.

I look at the pictures of this beautiful little girl and her joyous smile and it breaks my heart. It should break the heart of any parent.

How did this happen?

The suicide rate among school children has sky rocketed in Colorado and we have to ask ourselves why, before we can ever hope to implement any effective policy.

In medicine, all physicians are taught, “First, do no harm”. This concept needs to be embraced by our schools and by education companies selling new products and gimmicks into our schools, with little regard for the effect it might have on students.

Our schools are bloated with every form of Health and Wellness programming  being given to our kids; the so-called Signs of Suicide training for children (SOS); Depression screens and surveys; access to the odious Trevor Project, with it’s enticements into private chat rooms and suicide discussions; schools that provide access to the revolting book 13 Reasons Why. This book, with it discussions of why suicide might be an option and why, through suicide, a child’s status might even be elevated in the community, should never be on a school library bookshelf.

This cheer squad for suicide is listed as being in the library catalog of this little girl’s school (Sunrise Elementary School). I’m not a big fan of censorship but placing this book into an elementary school, where this child attended, might be one of the worst librarian decisions ever encountered. What is wrong with the librarian at this school? This isn’t a book for elementary school children and all of your ALA mindless drivel about the 1st Amendment and censorship doesn’t change that fact. I certainly see that where there is any criticism posted regarding  how a library is being run, it disappears after a day.  So stop being such hypocrites! You’re all for censorship, as long as you are the censors.

Librarians have been given far too much authority in the present climate. High level administrators bow down to the so called Library Leadership Teams… these are librarians… who are making dangerous decisions without any questioning or oversight.

Suicide in children was, at one time, very rare. Why would a child of 10 even think of suicide? Where did the idea come from? This is a concept that used to live almost exclusively in the tormented minds of adults. How did it ever become a consideration and an option for children?

Over the past 20 years, as our children have progressed through the Cherry Creek School District, we have seen an increasing focus (read spending), generated by school districts and education charlatans selling emotional poison, on programs to address bullying, on gauging the Health and Wellness of our children, on preventing suicide. At what point does the cure pose more risk than the disease, if ever a cure was really needed?

The school district has poured buckets of money at this problem and wasted thousands of hours of instructional time with, as is obvious, little effect on the problem. The Colorado Department of Education now proposes squandering even more taxpayer dollars on programs that are just not producing any results. If you’re not aiming at the target, you can’t hit it.  What is it Einstein is quoted as saying? “The definition of insanity is doing the same thing over and over but expecting a different result”.

Somebody is benefiting from all of this and it is not our children.

My guess, anecdotally, is that the rise of child and teen suicide directly tracks the increasing introduction of these topics and programs into our schools. My further guess is that as these programs reached further down, into lower-aged school children, the incidence of self-harm and suicide increased in these populations, as well.

Will anyone do a study on this? I’m thinking no; it’d be bad for business.

Parents, you can take action; it will take a thick skin and a demanding demeanor to get to it but it will be worth the effort, for the safety of your children.

a) Have you been sad more than 2 times a week?

b) Have you ever harmed yourself?

c) How have you harmed yourself?

d) Have you ever engaged in cutting?

e) Have you ever played the choking game?

f) Have you ever considered suicide?

Is it just me, or do these questions look more like suggestions, balloons leading directly to Pennywise and a children’s house of horrors?

Parents- in writing, tell your school and district that these surveys are NOT to be given to your children. EVER!

2. The Trevor Project- This repugnant site is touted by many schools as a “safe” place for children, especially if they are anxious or depressed. Nothing could be further from the truth.

Here, children are enticed into private chat rooms with unqualified  “counselors”, who appear to be nothing more than other tormented souls, where these “counselors” engage your child in discussions of suicide, gender dysphoria, self harm and other issues they are not competent to discuss.

Adults are able to engage with your child, in private chat rooms, to “counsel” them. It has all the earmarks of a pedophile’s playground but, since parents cannot enter, no one knows for certain what, exactly, is occurring with the minor children that engage with the adults.

3. Signs of Suicide training- This is directed at your child, teaching them all the nuances of suicide contemplation. If your child had never contemplated having a choice in the matter before, he or she will certainly understand that choice after this training.

Importantly, this type of program is a blanket, one-size-fits-all, program, it does not focus on truly “at risk” children, it treats all children as being at risk and this is surely not the case.

Parents- In writing, tell your Principal and District that your child is not to participate in these types of programs. EVER! You are far better of engaging your own therapist for this. At least you can get references and see them for yourselves.

4. So-called Anti-bullying programs- Steer clear of these. You would be forgiven for thinking that, with the term “anti-bullying” in it, the program was focused on the bully. It is not.  Entire student bodies are made to sit through hundreds of hours of “training” and social indoctrination. It isn’t about bullying at all, and that’s why it doesn’t work. It’s about social re-engineering for the special interest groups that fund it.

As far as bullying policies, our schools are only focused on the victim, not the bully. If your child is bullied, they will be made to feel responsible for coping, and taught “strategies” for dealing with ongoing bullying. These programs more or less ignore the bully, leaving the bully to walk free. They are seldom disciplined.

We fall all over ourselves crying, “don’t blame the victim”, then put our kids in a position where they feel the responsibility for ending the bullying themselves. Some schools even insist that the victims receive counseling while the bully walks free, or force the victim into “mediation” sessions with the bully, even though experts recognize such techniques as disastrous, in terms of further empowering bullies.  Victims are told not to defend themselves, told to walk away, or run away and “ask for help” – ask for help from incompetent bureaucrats that refuse to discipline bullies because it would require state and federal paperwork to be filed.

We are the adults, and we need to take the action, not the children. The school culture abandons them to the bully and hides behind all the empowering words and rhetoric, such as “bully proofing” them with platitudes. The kids, however, know that the minute they leave the counselor’s office, they are gonna get the shit kicked out of them….again.

We need to show the victims and the bullies that a properly functioning anti-bullying program, rather than empowering the bully, deals swiftly and harshly with the bully and gives the bully a quick hall-pass out the door, never to return. You really don’t need an anti-bullying program to line a salesman’s pockets, or increase corporate profits if you’ve rid yourselves of the bullies. Let their parents deal with them. We’re tired of it.

School anti-bullying programs don’t work because they focus on the victim. The bullies walk free. We don’t have a bullying problem – we have enforcement problem.

We know of girls in our kids classes who have been verbally abused and threatened by boys, backing them up against walls and making crude suggestions to them, all year long. We know of other kids who have been hit and had their property destroyed on a regular basis, while their complaints to the school were ignored, other than to be offered ” victim counseling”. They didn’t need counselling, the little thugs tormenting them needed to be gone!

The net result of all of this misguided, feel good, accomplish little programming is:

Now, while all of the foregoing is bad, it gets worse.

Having created an atmosphere of hopelessness in our kids, a feeling that they have been abandoned by those tasked to protect them, it’s seems the damage is not enough. We have to legislate official and legal abandonment.

In the past Colorado legislative session, a number of bills (in one form or another) were introduced to separate your children from you and place them in confidential “chat rooms” with “counselors” who can, and will, discuss all sorts of topics with your child, all under the screen of confidentiality.

And how might these counselors be housed? Where might their offices be? Who might be providing these counselling services? Well, it might be in the conveniently located, new “School Based Health Clinics (SBHC)” springing up in our schools, owned and operated by none other than Larry Wolk, Head of the Colorado Department of Public Health. And, pray tell, what is Dr. Wolk’s position in the Colorado Dept of Health? Why he is the Director. And who will dish out the money for the funding of these School Based Clinics? Surprise, it is none other than the very same Department of Health where Larry Wolk is the Director.  Is it me? Does anyone else see a conflict of interest here?

In addition, as if this isn’t bad enough as it is, these clinics are entitled to go into classrooms and provide “depression screening” for all children who will then be sent to the school clinic for counseling, behind parents’ backs if Dem lawmakers have their way in this upcoming legislative session.

Again, I’m sure it is just me, but my guess is that 90% of all the kids will need some form of “counselling” in the helpful and convenient Larry Wolk provided clinics. If you have medical insurance, your insurance will pay for it. If not, then it will be billed, with gleeful abandon, to Medicaid.

And in case you’re not sure: the Colorado Department of Public Health links to materials from its website aimed at teaching staff how to deal with resistance from the public.  Look it up, it’s all there.

However, I would not be so completely cynical as to suggest that there is a conspiracy in all of this. That all of it, the programs, the suicide training, the anti-bullying programs, the proposed legislation, the clinics, Larry Wolk, the Department of Health….all of it… is just a  scheme for vendors and special interests to profit from the misery of our children. Pennywise, after all, is a fictional character in a movie. Right?

Tell that to the parents of Ashawnty Davis. They just thought they were sending their little girl  to school. 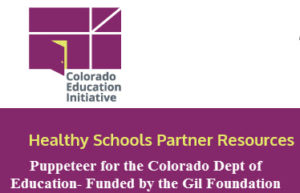