Think the intrusive, loaded surveys administered to your kids through your schools are bad? Well, we agree but at least most schools will give parents an opt-out (if they keep on top of their emails – notice may be short).

Parent’s rights have been at the forefront of discussions and legal battles for years now, both in Colorado, and around the country. It seems obvious that parents should have a right to know what kind of surveys are being pushed at their kids, and a right to know with whom the information is being shared, and why.

The wisdom, and even the scientific validity, of some of these so called “health” surveys has been drawn into serious question. We have seen surveys that appear more like push polls, with stacked, loaded questions which appear designed to make harmful suggestions to kids. Unbelievably, there are surveys with questions that seem designed to actually market birth control and tobacco products by name brand.

Parents are told this is for the good of our kids, but some surveys appear to target children as a marketplace, to sell products, and to push propaganda.

Ever Think Your Own Pediatrician Would Be On Board With This?

Most parents would answer “No!” to this question. But how would you know?

Here’s an example from Greenwood Pediatrics in Metro Denver – our organization has received a copy of the “secret survey” being administered to kids, 14 years old, with no notification to, or discussion with, parents; per clinic policy.

Although “opt-out” is an available option for parents, they first have to know that the survey is going to be given to their child. Invariably, this information is kept hidden.

The “secret” survey also contains leading questions that suggest self-harm is somehow a natural extension of feeling sad (if you felt sad 3 times, then suicide would be your next thought, right, kids?), or that vomiting is somehow a natural extension of wanting to lose weight (need to lose a few pounds, then surely you’ve thought about laxatives and vomiting, right, kids?). 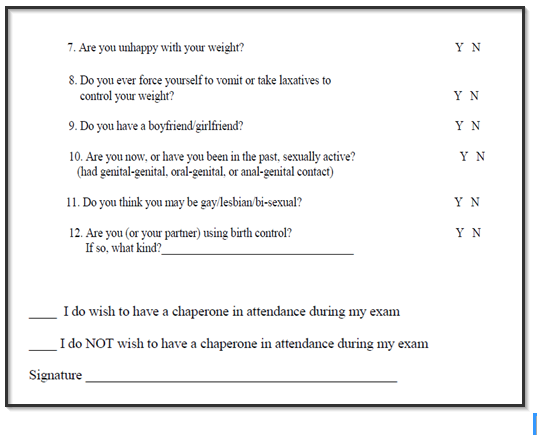 The explanation offered by the clinic for not advising parents of the survey was that “it’s best done [issuing survey to minors] without informing parents”, and if parents were aware of the survey they might “interfere”.

And perhaps most alarming of all, the minor child is asked for a signature to waive their right to a chaperone during any physical exam that might take place. Given recent news reports of pediatricians being charged with multiple counts of sexual assault on a child, does anyone think barring an observer is a good idea? No, that is why they ask the child and not the parent.
Many experts warn that kids should not be unattended in the doctor’s office due to the rash of serial sex assaults by pediatricians, such as the infamous, Larry Nassar case, Withham Health in Indiana, or Laurel Pediatrics, PA, to name a few.

Where Do The Survey Responses Go?

Well, that is the question, isn’t it?

One would like to think that HIPPA laws would protect this type of data. Maybe not.

What are the implications of a child, without the guidance of a parent, answering some of these questions? We have heard of surveys given by clinics that ask the child’s religion. How is this germane to medical care? Is there a “right” answer? What answer are they looking for? Who gets the answer? None of these questions are likely to be answered by your pediatrician’s office.

What you are likely to get, is defensiveness, hostility, deflection, and a refusal to give you a copy of the survey administered to your child, without your knowledge or input.

Most galling is the premise on which all this secrecy and deflection is based: parents are bad.

Now, pediatricians like those at Greenwood Pediatrics will deny this is the premise, but why else would they exclude the parent from this whole process?

Well, let’s face it, some parents are bad, that is the plain truth and we all know it. The book, Mommy Dearest wasn’t written to describe a happy, healthy homelife.

However, to base policy on such a view of parents is simply misguided and an insult to the 99.99% of parents that hold the health and well being of their children uppermost in their lives. It is why they get up in the morning, many working at jobs they hate. It is why they work long hours, travel frequently, lose sleep, worry, fret, go to basketball games and volleyball tournaments. They do these things because their children are the true measure of their wealth in this world.

The medical community, as guided by the increasingly radical American Academy of Pediatrics (AAP), does all of these good parents a cynical and hideous disservice. The erosion of the parent – pediatrician relationship was the topic of a recent essay in Public Discourse.

The lack of respect for parent’s rights, in schools and health-care, needs to be stopped.

One way to confront this issue is by early intervention.

At the beginning of each school year, write to the Principal, your child’s counselor, the Dean, any and all administrators that you think have interaction with your child and provide a clear directive that no survey is to be given to your child, unless you have time to review it and opt-in.

During parent teacher conferences, repeat to each teacher, no surveys are to be given without your approval.

Avoid School Based Health Clinics, the poster child for violation of parental rights, as we have written about previously

On your child’s first visit with his/her pediatrician, take a written directive that will instruct the physician’s office that no survey is to be given to your child unless it is first discussed with you.

As responsible, caring, parents, we need to confront this issue head-on. Unlike these surveys, secretly administered to your child, our motivation is clear: development of a healthy, happy child.